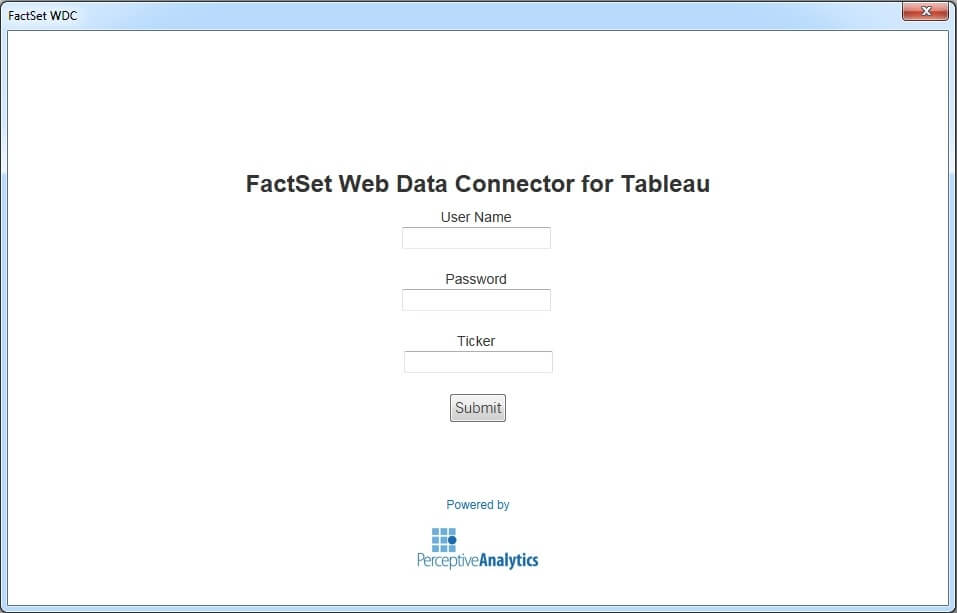 The project was to create Tableau Dashboards for visualizing financial information of different stocks/tickers that would be used by Financial Analysts. The data had to be obtained through an Application Programming Interface (API) of a third-party service provider called FactSet. The data had to be obtained on the fly as and when the dashboard user inputs a specific ticker.
What is a Web Data Connector?
A Web Data Connector (WDC) is a data connection option in Tableau that can be used to fetch information from web. A WDC is a web page with HTML, CSS & JavaScript. Whenever a user inputs a ticker, the WDC would take that ticker and make multiple AJAX calls to the third-party API asking for the required data. The third-party API’s servers would check authorization & authentication. If successful, they return the requested data in JSON / XML formats. The WDC parses the received JSON / XML information and transforms them into a tabular structure which is submitted to Tableau. Tableau then receives this information and populates the dashboard with updated data.
Project Experience & Learning

Part I: To build the dashboards in Tableau, we built a WDC that can fetch the required data from FactSet’s servers. While developing the WDC, we used JavaScript extensively to get the ticker input by user, frame the appropriate URL, make the AJAX calls, receive information, parse the response & transform it into the requires shape so that it can be given to Tableau. HTML and CSS were used to build the user interface of the WDC where the Tableau user can input the ticker data. We dealt with Cross Origin Resource Sharing (CORS) limitations to fetch the required data. To overcome CORS, we had used a proxy server to route our request.

Part II: We built multiple dashboards to display the fetched data in a way useful for the analyst to understand the trading history of the stock/ticker, look into its financials, look into the broker estimates for future & make buy/hold/sell decision.

How to Get in touch
You can reach out to us by emailing cs AT perceptive-analytics.com