Propensity scores are an alternative method to estimate the effect of receiving treatment when random assignment of treatments to subjects is not feasible.

The concept of Propensity score matching (PSM) was first introduced by Rosenbaum and Rubin (1983) in a paper entitled “The Central Role of the Propensity Score in Observational Studies for Casual Effects.”

Propensity scores are an alternative method to estimate the effect of receiving treatment when random assignment of treatments to subjects is not feasible. PSM refers to the pairing of treatment and control units with similar values on the propensity score; and possibly other covariates (the characteristics of participants); and the discarding of all unmatched units.

PSM is done on observational studies. It is done to remove the selection bias between the treatment and the control groups.

For example say a researcher wants to test the effect of a drug on lab rats. He divides the rats in two groups and tests the effects of the drug in one of the groups, which is the treatment group. The other group is known as the control group.  As it is an experiment everything is controlled by the experimenter, like all these rats are genetically the same and grow up in the same environment, so he knows that any differences between them will be solely due to the drug that he has given them.

However this cannot be done with people because people are different from each other, they come in different shapes and sizes, ages, ethnicities, etc., However, at the same time people aren’t so different that we can’t find any similarities between them. This is when we can use propensity score matching.

I will now demonstrate a simple program on how to do Propensity Score matching in R, with the use of two packages: Tableone and MatchIt.

The dataset contains randomly simulated 1000 records of people with their demographic profiles, age and income, the Ad_Campaign_Response, whether they have responded to the campaign or not , 1 = Responded and 0 = Not Responded, and the Bought column, 1 = Purchased and 0 = Not Purchased.

The Treatment and Control Population…

The model above shows that the ad campaign had a 72.9% effect on the purchase.

Now let’s prepare a Logistic Regression model to estimate the propensity scores. That is, the probability of responding to the ad campaign.

We will use the tableone package to summarize the data using the covariates that we stored in xvars. We are going to stratify the response variable, i.e., we will check the balance in the dataset among the people who responded (treatment group) and who did not respond (control group) to the campaign. The ‘test = False’ states that we don’t require a significance test; instead we just want to see the mean and standard deviation of the covariates in the results.

Then we are going to print the statistics and also see the Standardized Mean Differences (SMD) in the variables.

Here we see the summary statistics of the covariates, we can see that in the control group there are 596 subjects and in the treatment group there are 404 subjects. It also shows the mean and standard deviations of these variables.

In the last column we can see the SMD, here we should be careful about SMDs which are greater than 0.1 because those are the variables which shows imbalance in the dataset and that is where we actually need to do propensity score matching.

In our example here, as it is a simulated dataset of just 1000 records and containing only 2 covariates we don’t see any imbalance but we will still go ahead with the matching and see the difference in the results.

We can now proceed with the matching algorithms with our ‘pscores.model’ and the estimated propensity scores. The matching algorithms create sets of participants for treatment and control groups. A matched set will consist of at least one person from the treatment group (i.e., people who responded to the ad campaign) and one from the control group (i.e., people who did not respond to the ad campaign) with similar propensity scores. The basic goal is to approximate a random experiment, eliminating many of the problems that come with observational data analysis.

1. Exact matching is a technique used to match individuals based on the exact values of covariates. 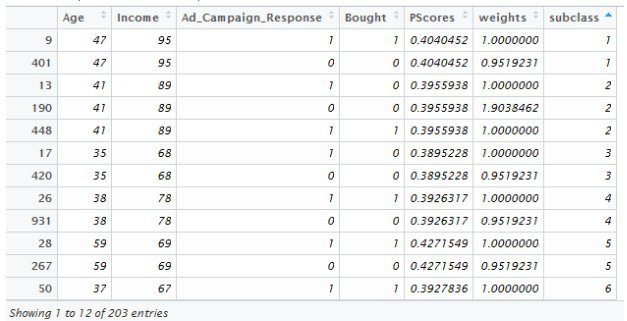 Create the tableone for exact matching…

We can see in the above results that there are 99 control subjects matched with 104 treatment subjects. As our sample dataset is fairly balanced we don’t see much difference in doing exact matching, instead the SMD numbers are slightly higher than the pre-matching numbers. We can try the same with nearest matching and see the effect of matching.

2. Nearest Neighbour Matching is an algorithm that matches individuals with controls (it could be two or more controls per treated unit) based on a distance. 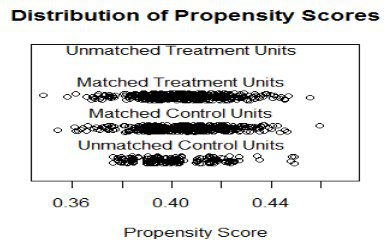 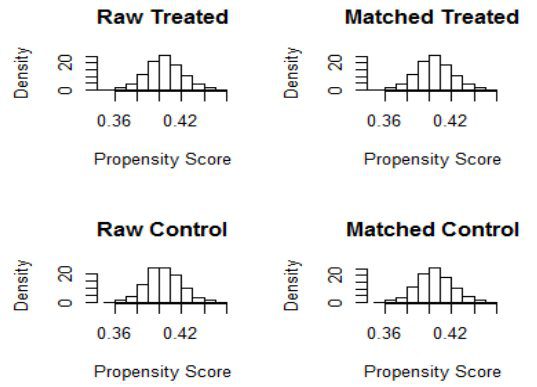 Create the tableone for nearest matching…

The first thing we see above is that we matched 404 controls to 404 treated subjects and also we can see we get very small numbers for SMD in the covariates, hence we can conclude that we did a pretty good job of matching with nearest neighbour. We have a great balance in the dataset now to proceed with our further analysis.

We will now do a t test to test our hypothesis that there is a higher chance of purchase of the product when people respond to the ad campaign.

Before performing a paired t-test we will have to create two subsets from the matched data, one for treatment and other for control groups.

Next we will calculate a pairwise difference of the two subsets