Home > Analytics > A Beginner’s Guide to Channel Attribution Modeling in Marketing (using Markov Chains, with a case study in R)

A Beginner’s Guide to Channel Attribution Modeling in Marketing (using Markov Chains, with a case study in R)

In a typical ‘from think to buy’ customer journey, a customer goes through multiple touch points before zeroing in on the final product to buy. This is even more prominent in the case of e-commerce sales. It is relatively easier to track which are the different touch points the customer has encountered before making the final purchase.

As marketing moves more and more towards the consumer driven side of things, identifying the right channels to target customers has become critical for companies. This helps companies optimise their marketing spend and target the right customers in the right places.

More often than not, companies usually invest in the last channel which customers encounter before making the final purchase. However, this may not always be the right approach. There are multiple channels preceding that channel which eventually drive the customer conversion. The underlying concept to study this behavior is known as ‘multi-channel attribution modeling.’

In this article, we look at what channel attribution is and how it ties into the concept of Markov chains. We’ll also take a case study of an e-commerce company to understand how this concept works, both theoretically and practically (using R).

What is Channel Attribution?

In the above scenario, a customer can either start their journey through channel ‘C1’ or channel ‘C2’. The probability of starting with either C1 or C2 is 50% (or 0.5) each. Let’s calculate the overall probability of conversion first and then go further to see the effect of each of the channels.

Markov chains is a process which maps the movement and gives a probability distribution, for moving from one state to another state. A Markov Chain is defined by three properties:

We know the stages through which we can pass, the probability of moving from each of the paths and we know the current state. This looks similar to Markov chains, doesn’t it?

This is, in fact, an application of a Markov chains. We will come back to this later; let’s stick to our example for now. If we were to figure out what is the contribution of channel 1 in our customer’s journey from start to end conversion, we will use the principle of removal effect. Removal effect principle says that if we want to find the contribution of each channel in the customer journey, we can do so by removing each channel and see how many conversions are happening without that channel being in place.

For example, let’s assume we have to calculate the contribution of channel C1. We will remove the channel C1 from the model and see how many conversions are happening without C1 in the picture, viz-a-viz total conversion when all the channels are intact. Let’s calculate for channel C1:

The removal effect of C2 and C3 is 1 (you may try calculating it, but think intuitively. If we were to remove either C2 or C3, will we be able to complete any conversion?).

Customer journey, which is a sequence of channels, can be considered as a chain in a directed Markov graph where each vertex is a state (channel/touch-point), and each edge represents transition probability of moving from one state to another. Since the probability of reaching a state depends only on the previous state, it can be considered as a memory-less Markov chain.

Case Study of an E-Commerce Company

Let’s take a real-life case study and see how we can implement channel attribution modeling.

An e-commerce company conducted a survey and collected data from its customers. This can be considered as representative population. In the survey, the company collected data about the various touch points where customers visit before finally purchasing the product on its website.

The overall categories of channels are as below:

Let’s move ahead and try the implementation in R and check the results. You can download the dataset here and follow along as we go.

We will create a variable ‘path’ in a specific format which can be fed as an input to the model. Also, we will find out the total occurrences of each path using the ‘dplyr’ package.

Now, we will create a heuristic model and a Markov model, combine the two, and then check the final results.

Before going further, let’s first understand what a few of the terms we’ve seen above mean.

Linear Touch Conversion: All channels/touch points are given equal credit in the conversion.

Getting back to the R code, let’s merge the two models and represent the output in a visually appealing manner which is easier to understand. 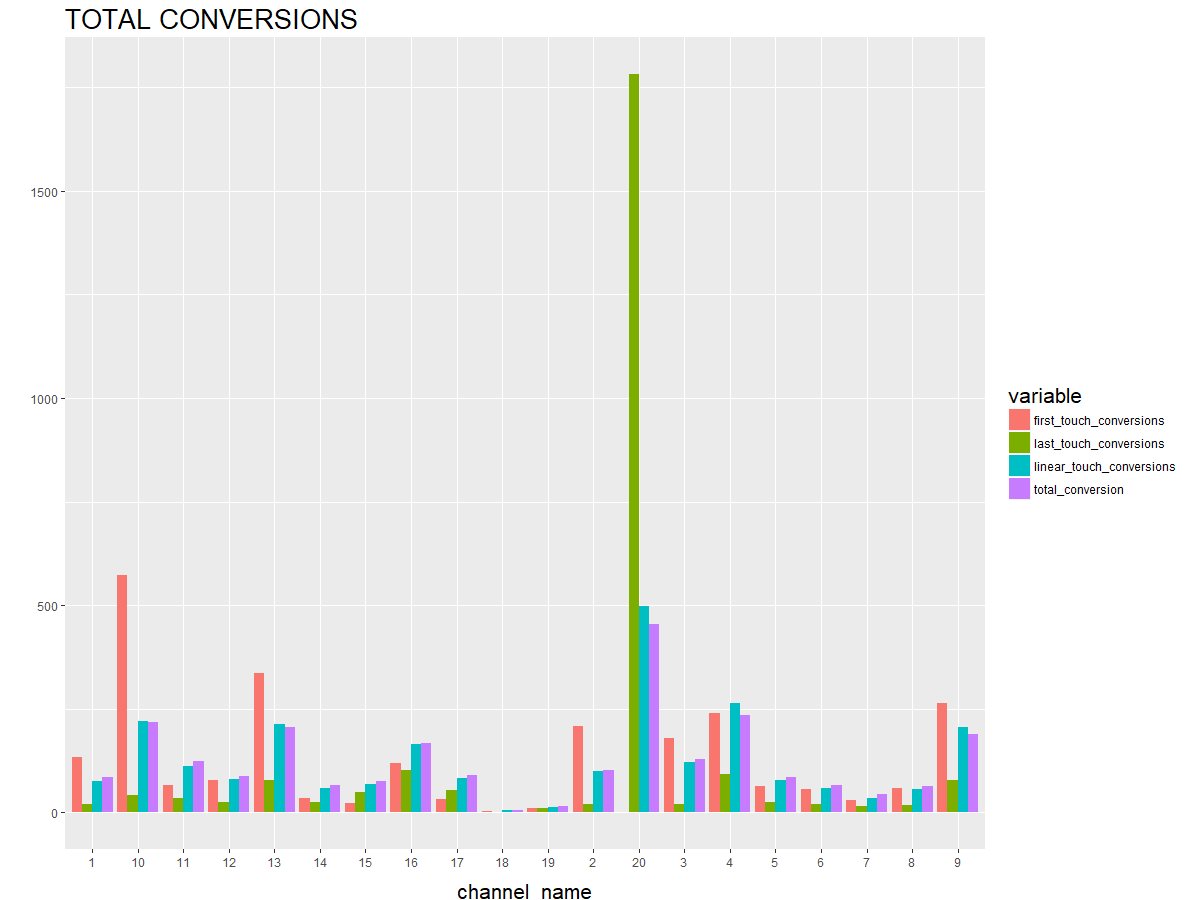 In the above chart we have been able to figure out which are the important channels for us to focus on and which can be discarded or ignored. This case gives us a very good insight into the application of Markov chain models in the customer analytics space. E-commerce companies can now confidently create their marketing strategy and distribute their marketing budget using data driven insights.